Bachchhan Paandey Movie Review: Fun in parts, but no match for Jigarthanda

The shine hasn’t faded on Jigarthanda. Released in 2014, Karthik Subbaraj’s second feature was a joyous ode to filmmaking. Its object of affection was gangster cinema—its giddiness, its exuberance. None of these emotions emerge convincingly in Bachchhan Paandey. Yes, the remake, directed by Farhad Samji and shifted to North India, has gangsters, filmmakers, and eccentric acting teachers. But it’s missing a crucial character: a love for film.

Consider Myra (Kriti Sanon), our protagonist. An aspiring filmmaker in Mumbai, she’s fired from an assistant directing gig after bruising the director’s ego. It’s hard to gauge if Myra is genuinely in love with the movies. Her father, a forgotten set hand, tells her to follow her heart, but she appears pressured by circumstance. Her short film shows a woman on a beach; her debut script is about an activist. A producer, possibly sensing a lack of vision, asks for something commercial. Eventually, Myra furnishes a subject: gangster Bachchan Pandey (Akshay Kumar).

Bachchan is surly, toothy, bearded, and strange. He’s a killer of Baghwa, in the ‘interior of India’, where Myra reaches to document him from afar. Her local friend, Vishu (Arshad Warsi), agrees to help her out, despite mounting evidence of Bachchan’s villainy. Or instability. In an early scene, for instance, Bachchan immolates a reporter, not for printing hard truths about him, but because he was made ‘into a cartoon’. Elsewhere, he crashes a wedding and extricates the bride with his dancing. Such a gifted hood… with a kill count of 42.

It’s useful, at this point, to invoke ‘Assault’ Sethu. In Subbaraj’s original Tamil film, Bobby Simha played the colourful gangster with a bumbling charm. It was a fun, knowing performance, allowing the film’s lens to demystify Sethu and reveal the edges. Akshay’s Bachchan, by contrast, is any Hindi film’s idea of a movie gangster. He’s given song after song, action sequence after action sequence. He is clearly the hero—which is why, when Myra is caught and forced to cast Bachchan in his own biopic, there’s no surprise.

The film works best when it sticks to the source. The pre-interval sequence where a mole is cornered and killed is neatly executed. References to Nayakan and Thalapathi are culturally translated to ‘Satya, Sarkar, Gangs of Wasseypur’. Pankaj Tripathi fills the (very large) shoes of Guru Somasundaram. However, as the film progresses, it loses its sense of fun. Bachchan’s origin story is a slab of old Bollywood—complete with ropewalking ex-lovers in melas. It evokes neither irony nor nostalgia; story writer Sajid Nadiadwala probably thinks it a convenient plot solution in 2022.

Winks to Akshay’s filmography are strewn throughout. A sample from Teri Ore plays, and, at one point, he calls himself ‘Jaanwar’, one of his better gangster roles. The title itself, Bachchan Paandey, is drawn from his Tashan character. The best nod, to my mind, comes near the end when Bachchan is given the Best Comic Actor award. He looks pleasantly surprised, as Akshay must have been in the 2000s after a slew of comic hits. 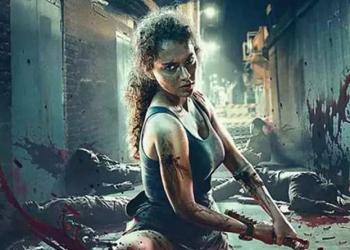