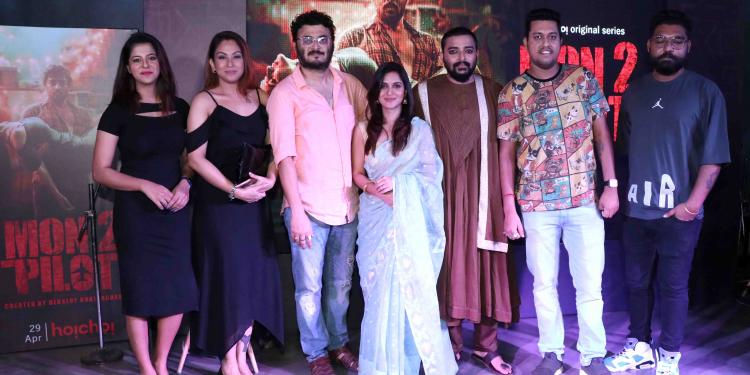 Subhajit Makhal:  Hoichoi organizes a celebratory press conference for its anticipated show “Mont 2 Pilot” in the presence of Saurav Das, Rafiath Rashid Mithila, Chandrayee Ghosh, Alivia Sarkar along with the director of the show Debalay Bhattacharya and the music directors Amit-Ishan.

The press conference also witnessed a heart- touching performance of the notable music duo Amit-Ishan bringing in the essence of the first season of Montu-pilot with the hit song “Bera Jal” and then performing the stirring song from this season “Kotata tomar chilo”.

Regarding Mon2Pilot Saurav Das said, ” It feels extraordinary great to be returning as Montu. Montu Pilot has become a part of me that i can’t explain.

It has taken me through phases and has shaped me as an actor. Rafiath Rashid Mithila while talking regarding her experience said, ” It gives me immense joy that Mon2 Pilot is the first web series from Kolkata that i am part of.

She also stated that she was eagerly waiting for the audience to watch Mon2 Pilot and looking forward to their response”.

Set to stream on Hoichoi from the 29th of April Mont2 Pilot is set to narrate the disnguished revenge story of Montu.

Founded in 2017 Hoichoi is the maiden venture of SVF under its new maiden section. Hoichoi is the leading Bengali platform with 2000 + hours of movies, 100+ original series.