Prabhudheva returns to film choreography to design a special song for Vishnu Manchu and Payal Rajput; here’s what we know 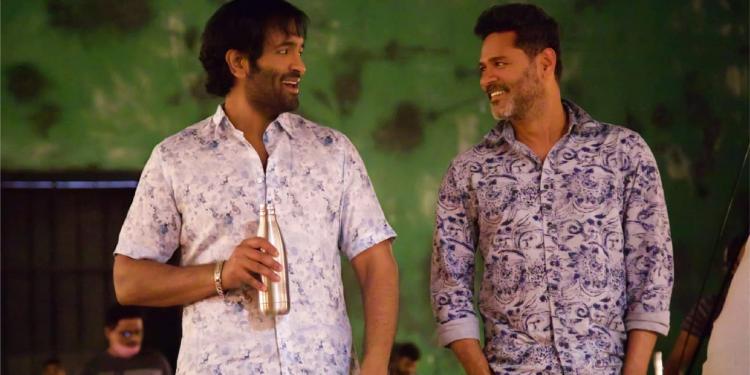 The makers of Telugu Superstar Vishnu Manchu’s next film co-starring Payal Rajput are leaving no stone unturned to make sure that the audience has a ball of a time watching their film. Having kick-started the second schedule of their yet Untitled comedy entertainer recently in which the Leading man Vishnu was joined by Sunny Leone & Payal in Hyderabad, the latest one hears is the inclusion of a special song that will be choreographed by the legendary Choreographer turned Director Dance Maverick Prabhudheva. The film also co stars sunny leone.

A source says, “Prabhudeva is on board to choreograph a special song for Vishnu Manchu’s upcoming film. Shooting of the song has started today after elaborate preparation and it is going very well. The shoot has been going on for the past two weeks in Hyderabad and this is the film’s second schedule, can’t wait to watch the chemistry between Vishnu sir and Payal.”

The song marks Prabhudheva’s return to choreography after a long hiatus and it must be something truly special in Vishnu Manchu’s Film for him to travel to Hyderabad to choreograph the song with Vishnu and Sunny. The makers wanted a specific look and scale for the song and there’s no one else who can pull it off like him.

On his part, tight lipped Vishnu tells us, “It is a fab song and we are dancing to some cracker steps. It is a dream to work with Prabhudheva. We are hopeful that it is the kind of song that will resonate with the masses.”

The much-awaited film written by G Nageshwar Reddy, who has directed films like Denikaina Ready and Eedo Rakam Aado Rakam. Touted to be an action comedy entertainer, the film will be directed by director Eeshaan Surya and dialogues have been penned by Bhanu and Nandu with cinematographer Chota K Naidu behind the lens. Anup Rubens will be composing the music.